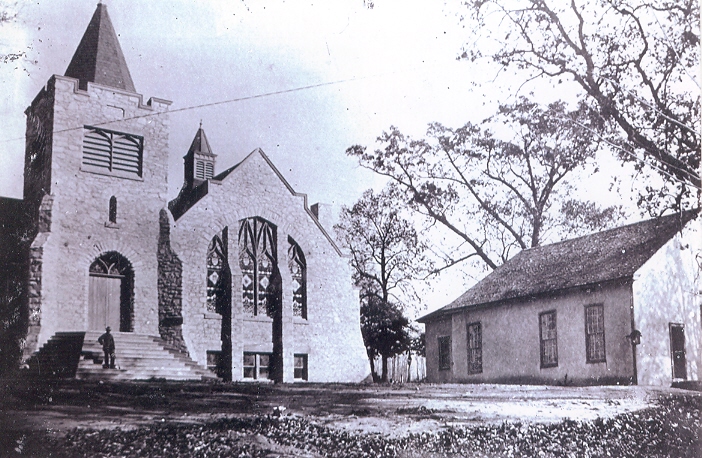 In conjunction with a May Meeting Anniversary Celebration held several years ago a series of five short historical capsules were written to summarize various aspects of the history of the church. Four of the five capsules are printed below with the fifth capsule called “What Is A May Meeting Celebration” being found on the May Meeting page of this website.

Capsule 1 – The Beginnings at Laurel

“About 1720, Rev. Owen Thomas, who had come from Wales… in 1707, was the first Baptist minister laboring regularly in Newlin Township. He preached at John Bentley’s house. After the death of John Bentley the meetings were held at the house of his son, Jeffrey Bentley, who in 1752 gave a lot of ground and built a meeting house.”

That meeting house is gone now but the cemetery associated with it still exists just three miles down the road just across the Brandywine. This was the original site for the gatherings of Baptist believers who would years later re-locate to our present site on Hephzibah hill.

To give the date 1720 a little more comparitive perspective, consider the following: In 1720 -

Capsule 2 – A New Church Just Up The Road


In John Y. Woodward’s 1871 account of the early history of the Hephzibah Baptist Church we read the following:

…there was a season of revival in the Newlin church which doubled it’s membership in a very short time. The old meeting house had become too small and being badly located, a new location was chosen where the present church now stands. The building of the new house was commenced by John Powell who drew the first load of stone August 12, 1792. The corner stones were laid by Rev. Joshua Vaughn who offered prayer and laid the south west corner, John Powell the north west, Col. Jacob Humphrey the south east and John Humphrey the north east corner, on the 29th day of August 1792. On the 18th day of May, 1793 the new meeting house was finished and Rev. David Jones preached the first sermon therein from John 4:24 – “God is a Spirit and they that worship him must worship him in spirit and truth.”

As the physical building was taking shape these believers no doubt understood that they were already part of ‘the household of God: and are built upon the foundation of the apostles and prophets, Jesus Christ himself being the chief corner stone’ (Eph. 2:19b,20)


In the year 1810 the little village of McWilliamstown, located on the Strasburg Road, was witness to an event that at first did not appear to have much significance. But this event would eventually change the identity and the significance of this area.

So, on May 20, 1810 the church located at McWilliamstown was constituted as an autonomous Baptist church. We have no record of how the church received her name but we do know the name that the church members agreed upon — HEPHZIBAH. This was definitely a unique name among churches. But, just like children’s names in the Bible which each had a special meaning, so too does the name Hephzibah.

The name Hephzibah is interpreted ‘My Delight is in Her’. The scriptural reference is found in Isaiah 62:4 where the Lord, in reference to Israel says “Thou shalt no more be termed Forsaken; neither shall thy land any more be termed Desolate: but thou shall be called Hephzibah, and thy land Beulah: for the Lord delighteth in thee, and thy land shall be married.”

But, hopefully, Hephzibah’s bigget impact on the village and the surrounding area was not to be found in her name but rather in the proclamation of ‘The Name Above All Names’ – Jesus Christ. Phillipians 2:9 tells us “God who hath highly exalted him, and given him a name which is above every name”. It is our faithfulness to proclaiming the Gospel that will allow the name of Hephzibah to be most fully realized!


In the mid to late 1800’s Hephzibah served as both the spiritual and social center for the area. A number of successful revival meetings were held during these times as well as the annual May Meeting Celebration (starting prior to 1840) and the annual Harvest Home Festival. The following excerpts of newspaper articles appearing in the Daily Local capture the spirit and Spirit of these events.


The most extensive revival ever known in this place has been enjoyed by the Hephzibah Baptist Church during the last two months. Meetings have been held for every evening for nearly seven weeks. Nearly 60 people have been made happy in Jesus, 53 have been baptized, and yesterday the Pastor received 51 new members into the church by laying on of hands, giving the right hand of fellowship, and an appropriate Scipture text to each one. It was a very pleasant sight to see so many, and most all of them young people too, take up the Cross to follow Jesus. The Spirit of God is still with us, and others are waiting to be baptized. The church is much revived and very active in the good work. To God be the glory!


Yesterday again was the time honored annual custom observed of a general turnout at the old Hephzibah Baptist Church, in East Fallowfield township, termed the “May Meeting”. From every direction and by every avenue leading to that place, a throng of vehicles was seen from early in the morning until afternoon, when the current changes in the homewardly direction. It has been estimated that over 2500 persons were present, of which number not one sixth could gain admission into the little church. The May Meetings have been held from the earliest organization of the church, and really are its anniversary observances. In times gone by as high as six and eigth thousand people have been seen together on these occasions.

The series of revival meetings commenced at Hephzibah Baptist Church, on Sunday, October 8th, is still progressing with rapidly growing interest. On Tuesday evening there were six aldults at the alter and others in the congregation who asked for prayers. The meeting did not break up until a late hour. The church is thoroughly revived. There will be an afternoon meeting next Saturday at 2 o’clock. There will be preaching every night while the interest continues as it is at present.

The twentieth annual Harvest Home at Hephzibah grove will take place on Saturday, August 13th. These gatherings are truly grand and interesting. The grove is a delightful place, a cool breeze always stirring. The refreshment stands loaded with good things, the fancy tables loaded with the handiwork of the young ladies while the dinner and supper tables are always well patronized. Large fires light the grove at night. A band of musicians discourses music throughout the day. Several short orations are delivered, and the woods resound with song and glee. While the lads play ball in an adjoining field the ladies try croquet and tennis on the lawn. If you wish to enjoy a pleasant day don’t forget the Harvest Home at Hephzibah on the 13th.

** In 1720 the church began as a small group of believers who met in the home of John Bentley at Laurel, Newlin Township

** Jeffrey Bentley, John’s son, deeded property for a church to be built in 1752 in Laurel, Newlin Township

** The oldest legible burial stones in the Laurel cemetery:

** Owen Thomas was the first preacher at the Laurel gatherings. He pastored the flock from 1720 through 1760

** Owen Thomas is buried at Vincent Baptist Church, where he also preached

** On May 20, 1810, the church was organized and constituted as Hephzibah Baptist Church

** The first burial in the cemetery at the present location was Rachel Thomas, daughter of Jacob Thomas, August 8, 1793